It was the auspicious day of Makar Sankranti and the atmosphere in Bombay was alive with fervour and the promise of spring.

Around a white edifice just off Cuffe Parade, the extreme southern gradient of the city, the bustle was more perceptible. The first phase of construction of the World Trade Centre, Mumbai, was complete and it was the day of the Centre’s inauguration.

The facade of the Arcade stood against the breathtaking backdrop of the Arabian Sea, grand and glistening in the sunlight and impressive in both form and spirit.

Standing on land reclaimed from the shallow sea waters and fortified with concrete cement and imported steel, the Centre was to be spread over 17 acres adorned with beautifully-landscaped parks and gardens and wide boulevards.

It exemplified a common good, born out of an endeavour of industrialists, businessmen and the government. It embodied the vision of a modern India, an India that would span the chasm between the bullock-cart and the jet. It also epitomised the conviction of Sir M. Visvesvaraya, who first conceived of the Centre, that India’s future prosperity lay in trade, industrial research and development. 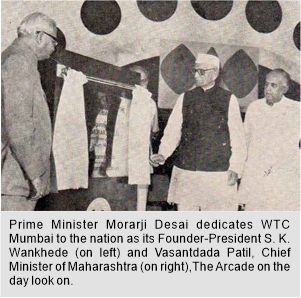 At the appointed hour, India’s Prime Minister Morarji Desai, who had flown into the city especially for the ceremony, unveiled the plaque dedicating the first World Trade Centre to the nation. Overwhelmed by pride, the Centre’s Founder-President S. K. Wankhede gave an impassioned speech tracing the Centre’s journey and the contributions made by the Government of India, the Government of Maharashtra and business and industry.

The eminence of the occasion, which was presided over by Vasantdada Patil, then Chief Minister of Maharashtra, was enhanced by the presence of a host of luminaries from Indian industry, business, commerce, government and media and enriched by congratulatory messages that poured in from the World Trade Centers’ Association (WTCA), New York.

The Arcade had brought together emporia of all major Indian states, sparkling with the beauty of their crafts; industrial houses like those of Birla, Garware, Reliance, Walchand and others showcasing their capabilities; and banks, shipping companies and travel organisations, attentive to providing service for conduct of international trade.The beginning was propitious. The pride of the country was palpable and was to be the wind beneath the wings of the Centre, to swiftly ascend into a significant catalyst for an emerging India.

Across the globe, the Sixties was a decade of crucial happenings in international trade. India, a signatory of both the General Agreement on Trade and Tariff (GATT) and the United Nations Conference on Trade and Development (UNCTAD),was also abreast of the developments. Chambers of Commerce were mushrooming across the nation and industries were diversifying and establishing economic and trade linkages with other nations.

Such unfettered expansion, however, was not without peril. There was congestion in the ports, delays in transactions,lack of market information and more. Solutions appeared to be intractable and beyond the ambit of governments and chambers.There arose the need for an enterprise that would manage these issues and anticipate the requirements of the times.The world was ready for world trade centres. 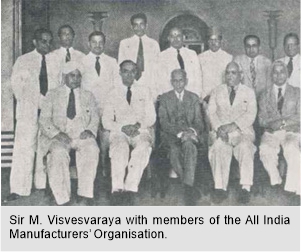 In India, Dr. M. Visvesvaraya had in 1941 established the All India Manufacturers’ Organisation (AIMO) to give a form to his mantra — industrialise or perish.By the 1960s, the Organisation with its motto of ‘prosperity through industry’ had spread wings by establishing chapters and engaging in programmes to realise its objectives.

Inspired by Dr. Visvesvaraya’s vision of a trade and industry research and development centre for promoting knowledge and development, the AIMO had, in the late 1950s, also approached the then Government of Bombay State for a plot of land for setting up such a centre. Bombay was a natural choice since it was the industrial, trade and commerce capital of India and the place from where growth impulses spread throughout the country. During 1960-61, after the State of Bombay had been divided into Maharashtra and Gujarat, the AIMO persisted with its cause with the Government of Maharashtra. Its perseverance paid off when the government agreed in principle to provide land for the Centre in south Mumbai.

Appreciating the magnitude of its proposal, the AIMO now decided to establish a separate organisation for the purpose, christening it the Industrial Foundation. The Foundation raised seed money through promotional activities and added value to the proposed project by incorporating the world trade centre (WTC) concept that was evolving across the globe at that time.

The world trade center idea finds favour with Indian Prime Minister Indira Gandhi as she is briefed by architect Pheroze Kudianavala (extreme right) at the 1968 annual general meeting of the All India Manufacturers’ Organisation. 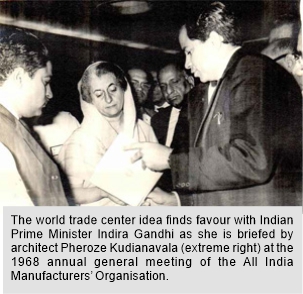 A delegation of leading industrialists approached the then Maharashtra Minister for Industry, S. K. Wankhede, who was delighted with the idea. In 1968, during the AIMO’s annual general meeting,the WTC concept was explained to and also found favour with Prime Minister Indira Gandhi. This was the spur the AIMO needed and P. L. Badami, AIMO Director General and D. R. Joshi, Financial Advisor,Industrial Foundation, began devoting more time and focus to the blueprint.

Finally, on June 26, 1970, the M. Visvesvaraya Industrial Research and Development Centre, was registered under the Indian Companies Act, 1956, as a non-profit company, its mission being to conduct industrial research and development.

Eminent architect Pheroze Kudianavala was engaged to draft the physical structure of the proposed centre and S. K. Wankhede agreed to be the Centre’s president.

World Trade Center, Mumbai’s architect Pheroze Kudianavala clearly remembers a March morning in the year 1967. He was enjoying his morning cup of tea with the day’s newspaper spread before him when he chanced upon a small insertion stating that the All India Manufacturers’ Organisation (AIMO) required consultants for acquiring land and drawing up a blueprint for its proposed M. Visvesvaraya Industrial Research and Development Centre (MVIRDC). Kudianavala, who had then just been appointed to design the Air India edifice, was fascinated and decided to meet AIMO representatives. He was offered the consultancy, which he took up with enthusiasm. Even the knowledge that the AIMO had no resources to buy land did not deter him. He instinctively knew that he could help make the vision into, literally, a concrete reality. On learning that the Government of Maharashtra was in the process of reclaiming land from the shallow waters near the southern seashore of Mumbai, Pheroze Kudianavala decided to approach Maharashtra’s Minister for Industry S. K. Wankhede. 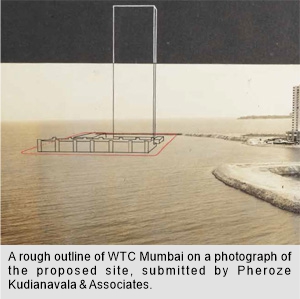 The rest, as they say, is history.The Seventies were perhaps the worst decade for the economy of most industrialised nations since the Great Depression of the 1930s. Economic growth rates were considerably lower than in the previous decades, inflation rates rocketed and the oil shocks of 1973 and 1979 merely added to the existing ailments. In the United States of America, manufacturing industries had begun to decline. In Eastern Europe’s Soviet-style command economies, successes were persistently dogged by setbacks.In contrast, Japan’s economy, boosted by growing exports, continued to expand and prosper. Rapid economic transformation was also witnessed in the export-driven economies of the four Asian tigers —Hong Kong, South Korea, Singapore and Taiwan.

In the midst of all these upheavals, the Mixed Economy of India continued to remain isolated. Its annual growth rate never crossed four per cent and apart from the oil shocks that rattled it, the country was also affected by droughts, wars, a labyrinth of rules and regulations, low industrial growth, lack of infrastructure and, most of all,a non-conducive investment climate.

A prosperous India, driven by industry and trade,had nevertheless already been envisioned and, thus,notwithstanding a depressing climate, the seeds of the World Trade Centre, Mumbai began to germinate,evolving effectively and taking on a definite form. This germination of the WTC embryo, however, was not without pain. 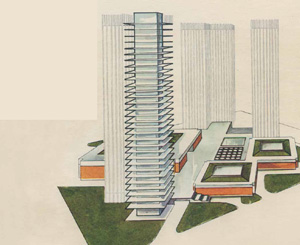 The MVIRDC had been registered as a scientific research association that would provide advisory and consultative services for development of Indian trade and industry. As a natural corollary to all its industrial research facilities, therefore, there was to be a complex of industrial museums, trade arcades, expositions,libraries, bureaus and a world trade centre. It had to be planned on a gigantic scale.

However, like any other organisation surging ahead against the winds of the times, WTC Mumbai encountered problems and hurdles that ranged from scarcity of suitable land to financial and construction constraints to even disagreements on purpose and activities.Nevertheless, none of these obstacles could intimidate its first council of management, which only grew more committed to building a utility of worth.

The facilities of the MVIRDC — the WTC Mumbai being the jewel in its crown — was to be established on 17 acres in the Cuffe Parade Back Bay Reclamation area, offered on special lease terms by the Government of Maharashtra for 99 years. Pheroze Kudianavala, enlightened from his visits to various exhibitions abroad and also with a view to scaling down the cost, designed a maximum-utility Centre,comprising separate inter-connected structures.

Finally, in the blueprint drawn up by Pheroze Kudianavala & Associates there was to be:

At about the same time when activities were warming up towards putting the World Trade Centre in place,Pheroze Kudianavala happened to make a visit to New York. One winter morning, as he was relaxing on a park bench, watching the goings-on at a gigantic construction site some distance away, a stranger came up and asked him if he liked what was taking shape. 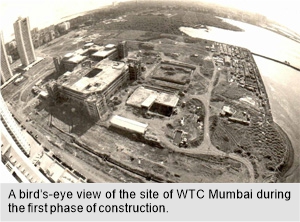 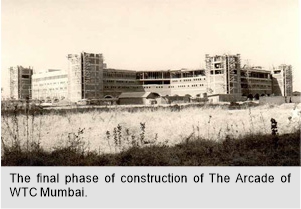 Pheroze Kudianavala & Associates went on to incorporate quite a few architectural ideas that were exchanged that day in New York, making the final blueprint of the WTC Mumbai eclectic in spirit.

Nearer the time of construction, reorientations to the original scheme of the complex had also to be introduced in order to conform to the Life Insurance Corporation of India’s (LIC) loan conditions and also at the instance of the Bombay Municipal Corporation.

In 1973, the MVIRDC set up a project office near the main Cuffe Parade Road since the site was way off and widening of the road leading to the plot was still at a formative stage. The registered office of the Centre was also shifted to this two-storey concrete building that was built on a 2,200 square-metre plot taken on temporary lease from the Government of Maharashtra.

Around the same time that year, a beginning was also made in letting out space at the Trade Centre. With members of the Council of Management taking up an area of 10,000 square feet among themselves and given the prestigious value attached to owning a shop in the complex, the remaining space was also expected to be taken up rapidly.

The Trade Centre was originally planned as a two-storey structure and the construction contract accordingly awarded to Messrs Shapoorji Pallonji & Company Private Limited. Thereafter, expecting more lessees to come forward, a second, third and mezzanine floors were also planned. Shapoorji Pallonji was then entrusted with the additional work on condition that in spite of doubling the area, all spaces would be ready for occupation, as earlier stipulated, by November 1975.

By December 31, 1974, 1,421 square metres on the second floor had been booked by the Indian Institute of Bankers and the Gramophone Company of India Ltd. Negotiations with the Great Eastern Shipping Company Limited and the Reserve Bank of India for lease of the remaining area on the floor also bore fruit.On the ground and first floors, space approximating 3,905 square metres had also been leased for sale and display of goods.

Finally, on March 27, 1974, the World Trade Centre was announced through a press conference held at its premises.