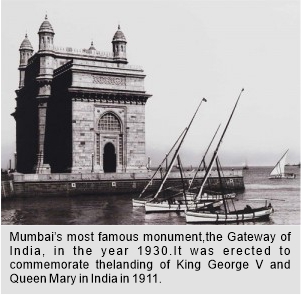 The city of Mumbai, named an alpha world city in 2009, lies on the western coast of India and is part of a land mass which originally comprised of seven islets that were joined through drainage and reclamation projects and causeways and breakwaters.

A low-lying plain, Mumbai is flanked on the east and west by two parallel ridges of low hills. Colaba Point, the headland formed in the extreme south by the longer of these ridges protects Mumbai Harbour from the open seas while the western ridge that terminates at Malabar Hill is one of the highest points in Mumbai.

In between lies the shallow expanse of the Back Bay and it is on a plot of land that was part of the Cuffe Parade reclamation, close to Colaba Point, that the World Trade Centre, Mumbai now stands.Between the head of Back Bay and the harbour also lies a slightly raised strip of land called the Fort,ealier the site of 17th-century British fortifications and now occupied by public and commercial offices.The entrance into the wide Mumbai Harbour from the sea reveals a magnificent panorama studded with islands and dotted with the white sails of innumerable small craft beyond which life throbs in what is, truly, a cosmopolitan economic hub and the commercial and financial centre of India. 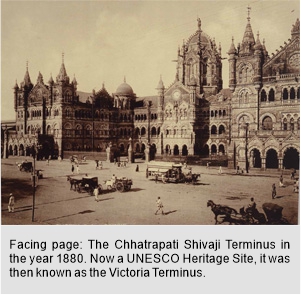 Bombay was ceded to the Portuguese by the ruler of Gujarat in 1534 and, in 1661, given away as dowry to King Charles II of England.In 1668, the Crown ceded it to the East India Company which used it merely to keep a toehold on the west coast until the turn of the 19th century when external events helped stimulate the growth of the city.

As the Mughal empire and Maratha power began to decay, instability in Gujarat drove artisans and merchants to the islands. Bombay began to grow and prosper; communications with the mainland were established and those to Europe were extended.

By 1860, the city had become the largest cotton market in India and so, when cotton supplies to Britain were cut off during the American Civil War (1861-5), a great trade boom happened here.

In 1869, when the Suez Canal opened, facilitating easy trade with Britain and continental Europe,Mumbai became a major seaport on the Arabian Sea. 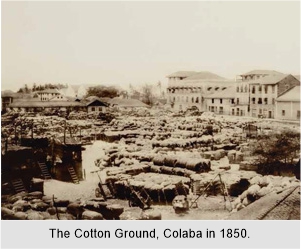 Today, Mumbai’s manufacturing industries are diverse and its commercial and financial institutions strong and vigorous. It is famed the world over as the entertainment capital of India and the wealthiest city in the country.

It is one of the world’s top ten centres of commerce in terms of global financial flow. Abundant business opportunities and the potential to offer a higher standard of living makes Mumbai an attractive destination and migrants from all over India weave their way into the weft of the city, making it a manysplendoured fabric of communities and cultures.